Printing ID cards can be a confusing undertaking.

While most people would love a simple solution that allows you to put a blank card in and get a printed one out without much thought, that's never the way it works.

People unfamiliar with ID card printers are often under the mistaken impression that these machines must be similar to standard paper printers; after all, printers are printers, right?

Unlike the "color vs. black and white" debate that countless offices and households have when shopping for a new paper printer, the search for an ID card printer requires a more detailed discussion.

Here are just a few of the questions one needs to consider when buying an ID card printer:

Overwhelmed yet? Hopefully not, because we haven't gotten to one of the most important questions yet: do you want edge-to-edge printing or over-the-edge printing?

Before you answer, let's take a closer look at what separates the two styles.

Living on the edge

When it comes to ID card printers, print style can mean one of two things: the method used to put the imagery on the card or the way the image appears on the card.

The former is normally through methods like dye sublimation or reverse-transfer printing; the latter is where edge-to-edge or over-the-edge printing come in.

Edge-to-edge and over-the-edge are two print styles that describe the way your imagery is printed on the surface of a card.

The difference between the two is subtle, but important.

What is edge-to-edge printing?

Edge-to-edge printing is a print style that leaves a slim border around the surface of your printed ID card. The border isn't printed; rather it's a small area of the card to which no print was applied.

Since most plain ID card stock is white, the border usually appears as white. However, a black card will get a black border, red card will have red, etc. 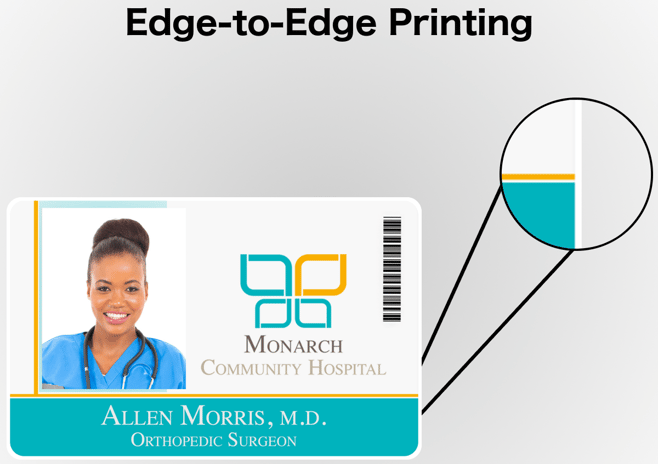 What is over-the-edge printing?

Unlike direct-to-card printers, where the printhead comes in contact with the card's surface, retransfer printers print the imagery on a thin layer of transfer film, which is then applied to the surface of the card.

This film fuses to the entire surface of the card, leaving no border.

So...do I want edge-to-edge or over-the-edge?

It depends on what you want out of your cards! Consider the comparison below before making your decision.

Now that you know the difference between edge-to-edge printing and over-the-edge printing, it's time to get yourself a new machine!